A special course meal with an emphasis on Japanese ingredients, accompanied by beautiful artifacts rooted in the various regions of Japan. In this second, autumn edition of the course, we will use small plates made of Takaoka copperware to enhance the three-dimensional character of the bite-size dishes, Echizen lacquerware sake cups with a beautiful image of the moon floating in the sake, Kyo-yaki lidded pottery ware with a flower-like crystalline glaze, and Arita ware plates that reinterpret the traditional technique of “Shinogi,” or decorative carved ridgelines, using modern technology.

The autumn course starts with Kikka-shu (Sake with floating Chrysanthemum petals).
September 9th of the lunar calendar* is considered to be the day of the “Choyo no Sekku”, also known as the “Chrysanthemum Festival”, and the chrysanthemum flowers play a main role.

In the Yin-Yang Wu-Xing school of thought, odd numbers are considered as “Yo”, and even numbers are “Yin” which are considered as unlucky numbers. For this reason, odd-numbered days such as “Momo no Sekku (the Doll’s festival)”, March 3rd, “Tango no Sekku (the Boy’s festival)”, May 5th, and “Tanabata (the star festival), July 7th, were lined up to dispel evil spirits and celebrate. September 9th is the day of the year with the largest numeric value among the odd numbers. Therefore, it is when the festivals and dispelling of evil spirits are most celebrated.

It is believed that chrysanthemum flowers have the power to extend their lifespan. Ever since the Heian period (AD794 – AD1185), there has been a practice of drinking chrysanthemum sake in the Choyo festival. It is believed that in prayers for good health and longevity, people drank the sake with chrysanthemum flowers that have been steamed and soaked overnight, resulting in sake with a floral-infused aroma. Nowadays, it is more common to drink sake with floating edible chrysanthemum petals for this festival.
Autumn is a season when the hot summer is finally over, the air is cooler, and the sky is higher with clear, beautiful air and water. I hope you will enjoy the course with drinking Kikka-shu to calm your mind while admiring the moon depicted on the sake ware. 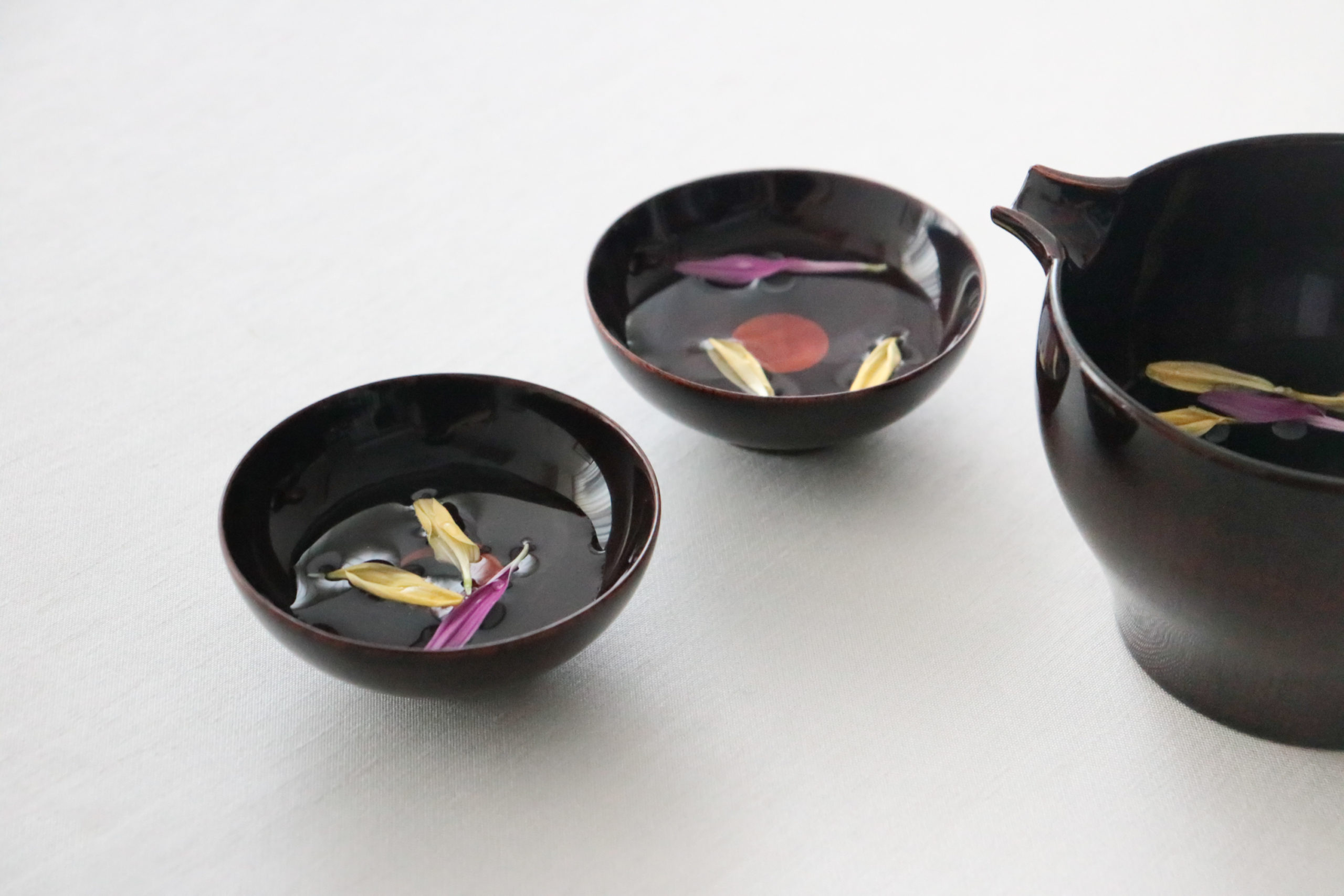 For this course, I prepared three bite-sized appetizers made from seasonal ingredients – Tempura of fig with raw ham and sage, grilled saury with a garland of chrysanthemum Genovese, and Japanese tiger prawn sushi in the shape of a chrysanthemum flower.

1. The moist and soft texture of the figs matches the crispy tempura. Also, the saltiness of the ham and the refreshing taste of sage are tantalizing.

3. The bright red and white prawns are shaped like a chrysanthemum flower to make a small sushi. It will be a gorgeous dish, even in lunch boxes for the holiday season. 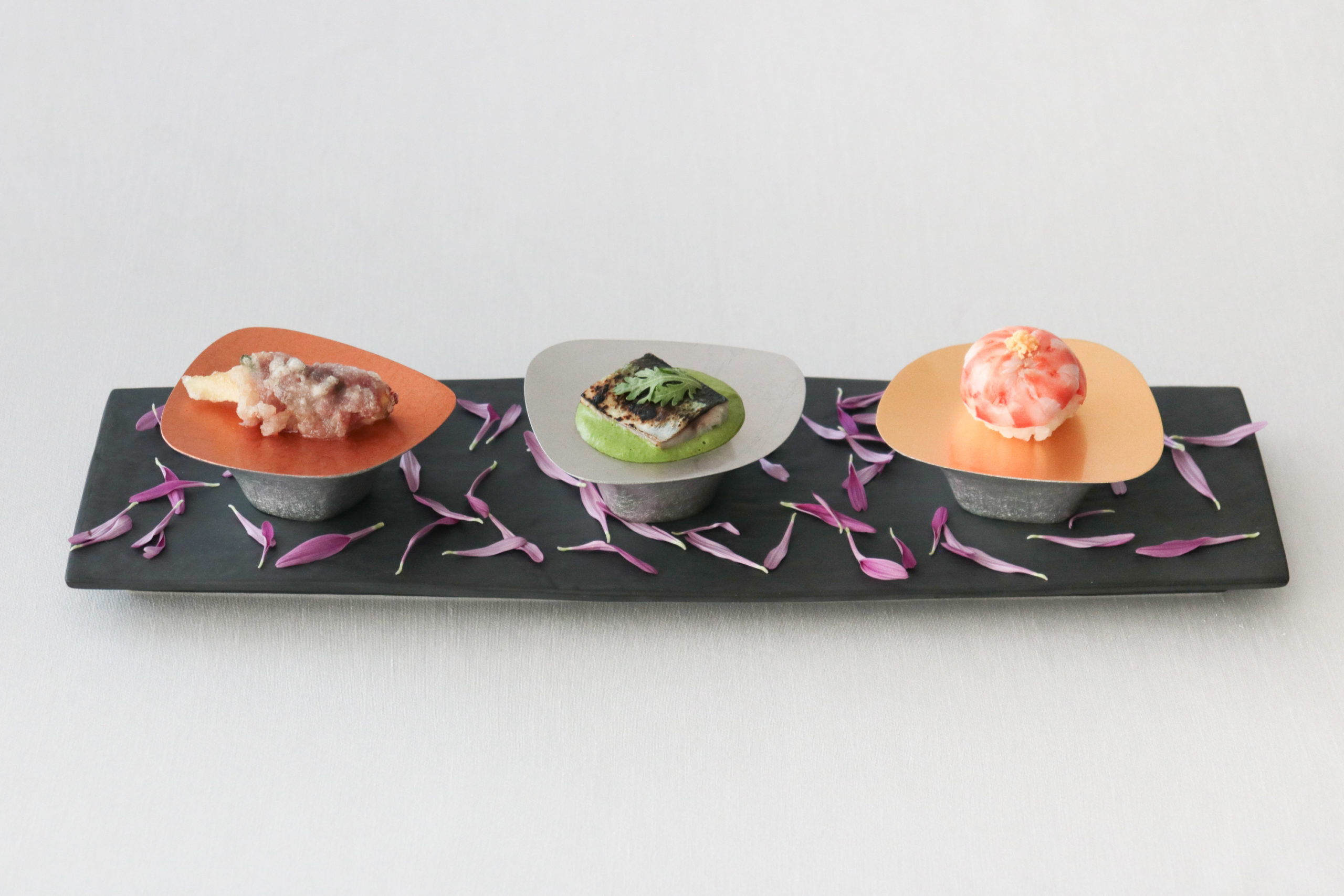 Crabs are ingredients that can be used all year round, but boiled crabs remind us of the autumn leaves. This time, I combined the Japanese pears, which are seasonal autumn fruits, and crabs, to make an autumn-like vinegared dish with citrus fruits. Instead of Japanese pears, regular pears, persimmons, grapefruits, and other citrus fruits are also suitable, so please enjoy this recipe with your preferred choice. You can use your favorite citrus such as yuzu, sudachi, or lemon as the citrus juice that will be mixed with the vinegar. The balance of sourness and taste will change depending on the kind of citrus used. Therefore, it is recommended to taste while making. Mix several types of citrus fruits to make them more delicious.

This time, I served the dish fully in a crystal-glazed container with a lid. This creates a fluttering image of the ginkgo leaves. Also, I used an underplate to add rhythm to the dish. This plate features the unique work of calligrapher Suito Nakatsuka which depicts the Chinese character “flower” in four stylized renditions titled spring, summer, autumn, and winter. For this dish, the “autumn” plate was used.

A delicious duck meat dish is perfect to enjoy when the season gets colder. This time, I added sauce using Kujo green onion (a Kyoto vegetable) to roast duck, a dish popular in Japan. This vegetable is one of the traditional vegetables grown and savored in Kyoto. Its deep green leaves and billowing length are beautiful. It is characterized by its slimy mouthfeel. This time, in order to bring out the flavor of Kujo green onions, I made the sauce in a short time duration. You can also substitute it using regular green onions as well.

I used a square stone plate for this dish. The matte-textured black plate displays the dish elegantly. It may seem challenging to serve on a square plate, but if you arrange the plating with a diagonal line in mind like this, it will have a well-balanced finish. 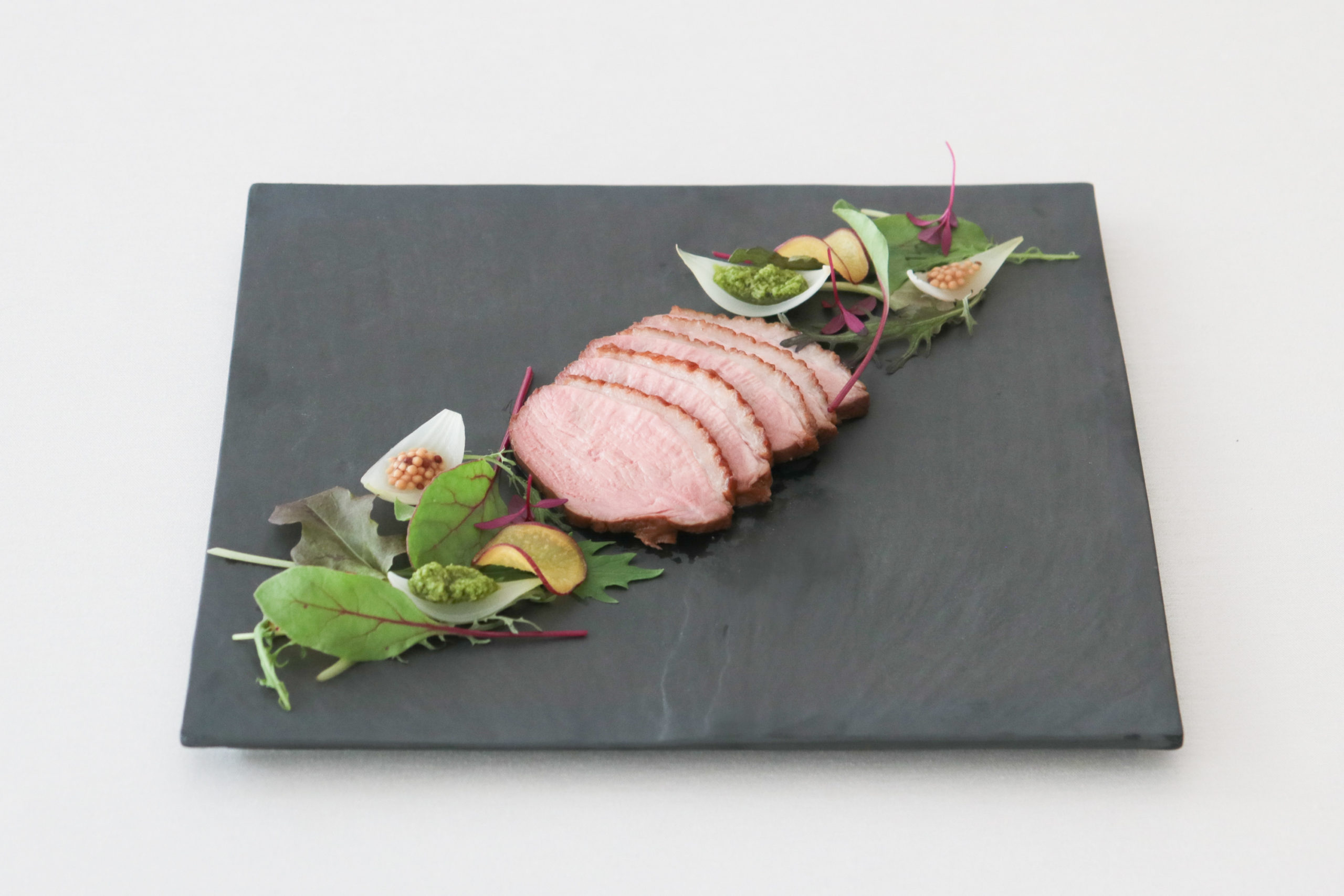 In Japan, many people consider “mushrooms” as seasonal autumn ingredients. Also, at this time of year, fresh, delicious rice are sold in many markets. Therefore, for this dish, I chose rice cooked with the delicious Maitake mushrooms with flavorful aromas.

Maitake mushrooms can be easily found in supermarkets regardless of the season, but natural Maitake mushrooms will start to be available from September to late October. There are many theories about how the name came about. The Japanese Kanji character literally means “dancing mushrooms”. Legend has it that this delicacy used to be so rare and delicious that those who find it will be so joyful they’ll start to dance.

Maitake mushrooms go well with dishes that use oils and fats such as tempura or butter saute, so I prepared rice cooked with high-quality olive oil and green olives. It is also a nice finishing touch to sprinkle some ground pepper before serving.

The vessel I used this time is a stylish wooden bowl with a beautiful grain that makes you feel the soft and warm textures of zelkova wood when you hold it. I also used a plate with a unique and playful design as the underplate to accentuate the unique combination of olives and maitake mushrooms. 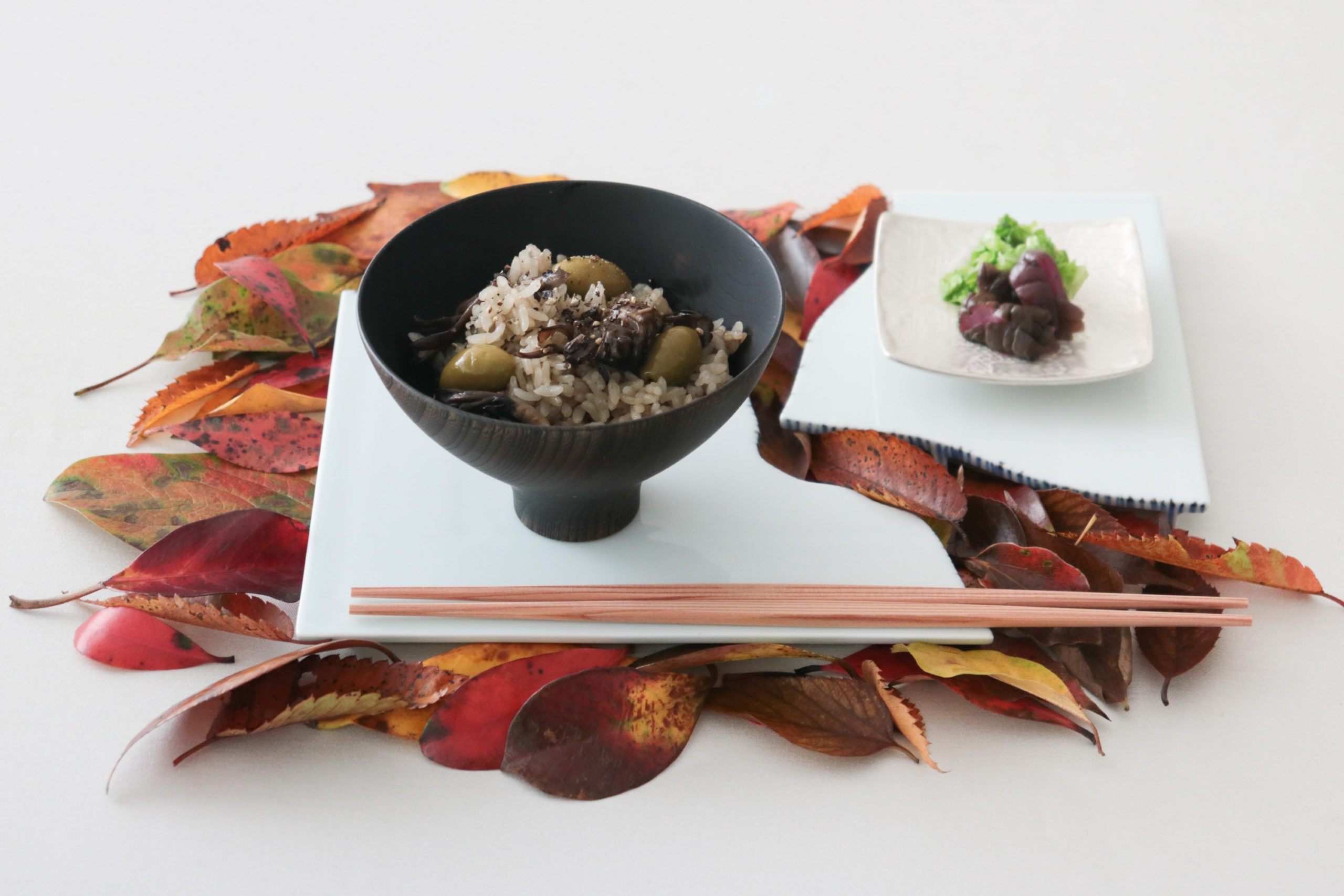 The last dish is a dessert using Anno potatoes. Anno potatoes are harvested from the end of September to the end of November at “Tanega-Shima Island” located in the southern part of Kagoshima Prefecture. Anno potatoes have a stronger taste than other sweet potatoes and are characterized by a sticky texture when baked. This time, I made it simple without adding much sugar, taking advantage of its natural taste. I added blue cheese to enhance the potatoes’ sweetness, but other types of cheese are also suitable. You can also make this recipe with different kinds of sweet potatoes instead of Anno potatoes, so please try making when it’s in season. I chose these tablewares because the rust color on the edge of the plate and the calm matte color of the Houhin (small teapot) seem to complement the sweet potato skin color. When you choose vessels for a dish, choose ones containing colors similar to the ingredients, and it will look harmonized with the dish. 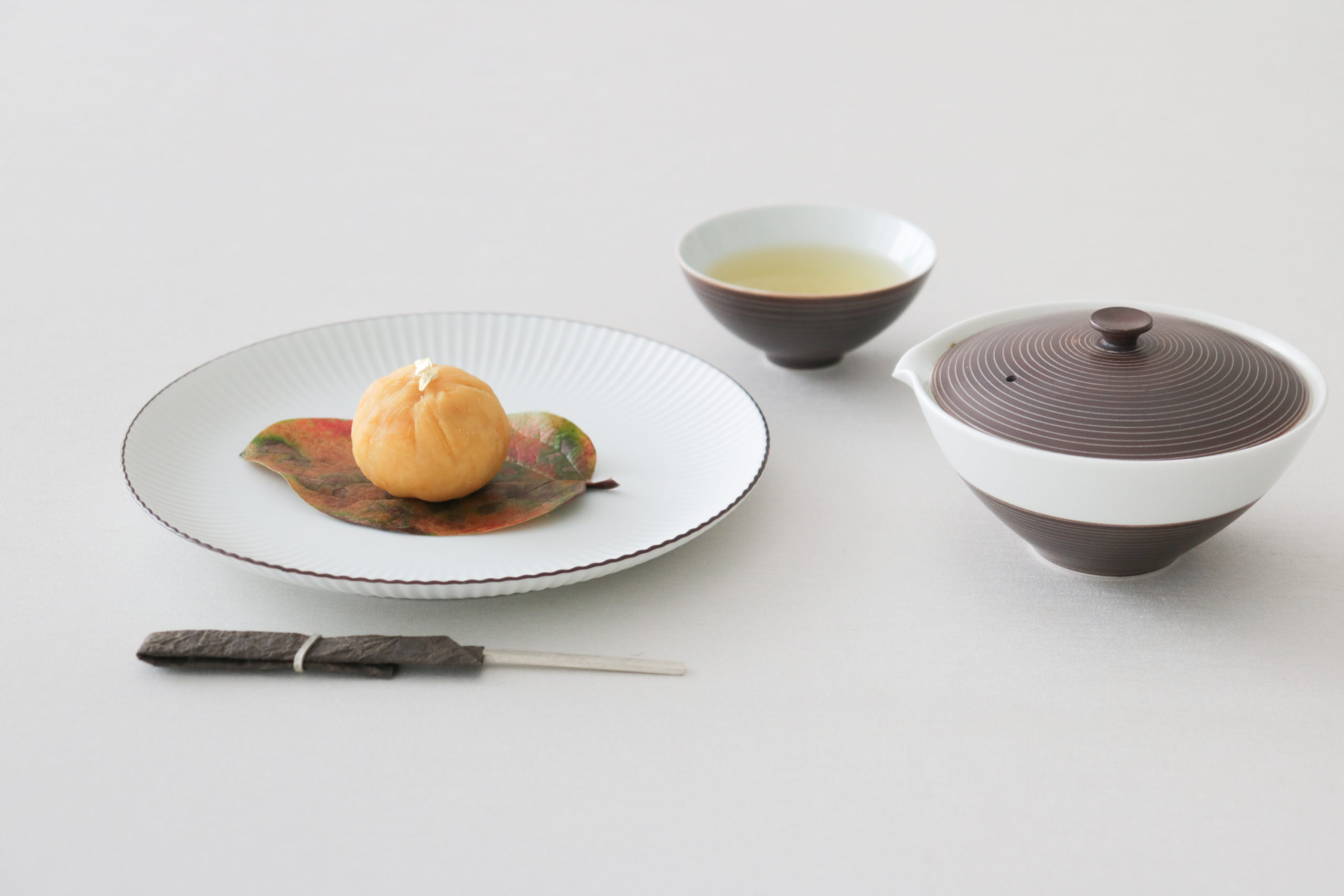 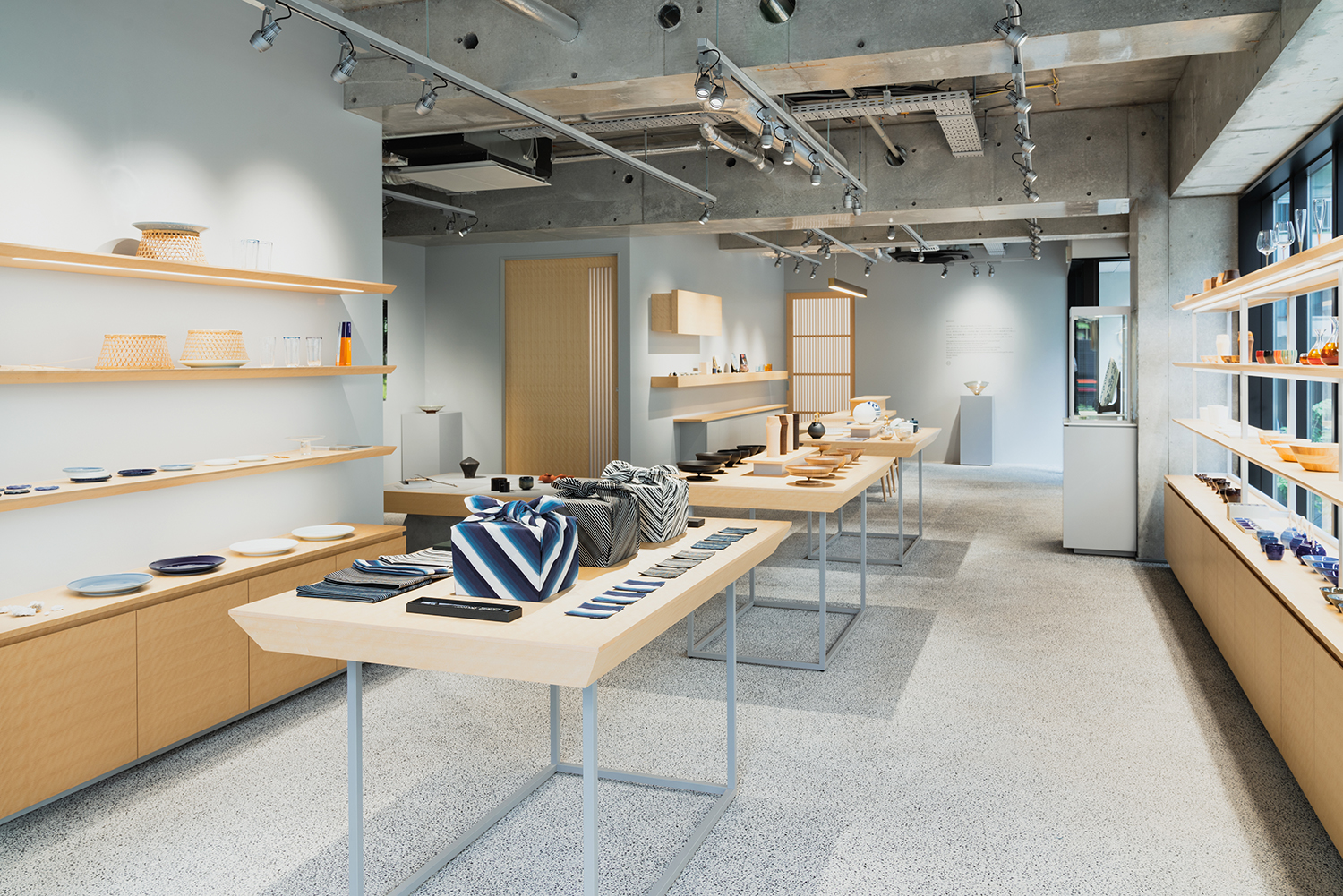